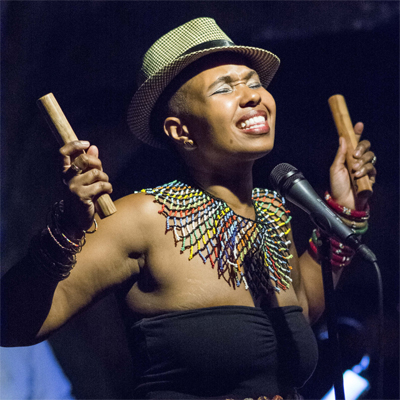 “Akua Allrich is simply magical, bursting at the seams with jubilance and grace. Over the years, Allrich has become one of the region’s most captivating performers: On stage, her voice and powerful presence suck in the audience, transforming any room into a sacred space of ritual.”

Allrich’s style is fluid and ever evolving. Her musical roots run deeply into blues, soul and rhythm and blues, with a clear grounding in jazz and pan-African music. She sings in many languages including Portuguese, French, Spanish, English, Xhosa, and Twi. Given her ability to capture the essence of a broad range of musical genres, Allrich is often likened to legendary artists such as Oscar Brown, Jr., Miriam Makeba and Nina Simone. She has developed popular tribute programs involving the latter two women and other great African American women of jazz.

Allrich has already proven her abilities as a performer and bandleader by producing and performing many successful solo and group programs. In addition to focusing on her own engaging compositions, she keeps an ear to the rest of the world and to other eras and artists. Akua Allrich has inspired music lovers from all walks on an international scale, who enjoy her exceptional work and expect nothing short of brilliant artistry from each of her offerings.

This performance is sponsored in part by the Jazz Touring Network, a program of the Mid Atlantic Arts Foundation.