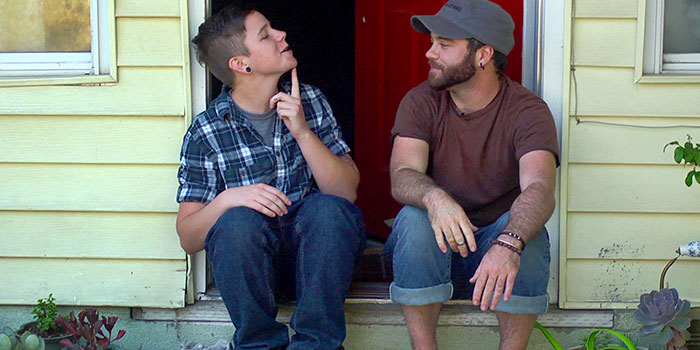 A Documentary by Shaleece Haas of Oakland, CA

Film Synopsis:
Real Boy is the coming-of-age story of Bennett Wallace, a transgender teenager on a journey to find his voice as a musician, a friend, a son, and a man. As he navigates the ups and downs of young adulthood, he works to gain the support of his mother, who has deep misgivings about her child’s transition.

We meet Bennett at age 19 as he emerges from a period of angry rebellion, fueled by drug abuse and self-injury. Estranged from his father and sister, Bennett seeks the love and understanding of his mom Suzy, who was once his best friend and ally. Suzy, a single mother with a self-deprecating sense of humor, sees Bennett’s desire to transition as attention-seeking and misguided. Unable to deal with her shame, confusion, and grief, Suzy keeps Bennett’s transition secret from friends and family, wistfully recalls what a beautiful girl he was and refuses to support his decision to take testosterone and undergo chest reconstruction surgery.

As tension mounts at home, Bennett is taken in by his idol, Joe Stevens, the lead singer of the alt-Americana band, Coyote Grace. After meeting at a sobriety conference, the two bond over their transgender identities, their love of music, and their shared experience with addiction. Over the next two years, buoyed by Joe’s support, Bennett grows into young adulthood. He enrolls in college, makes friends, and starts dating for the first time as a young man.